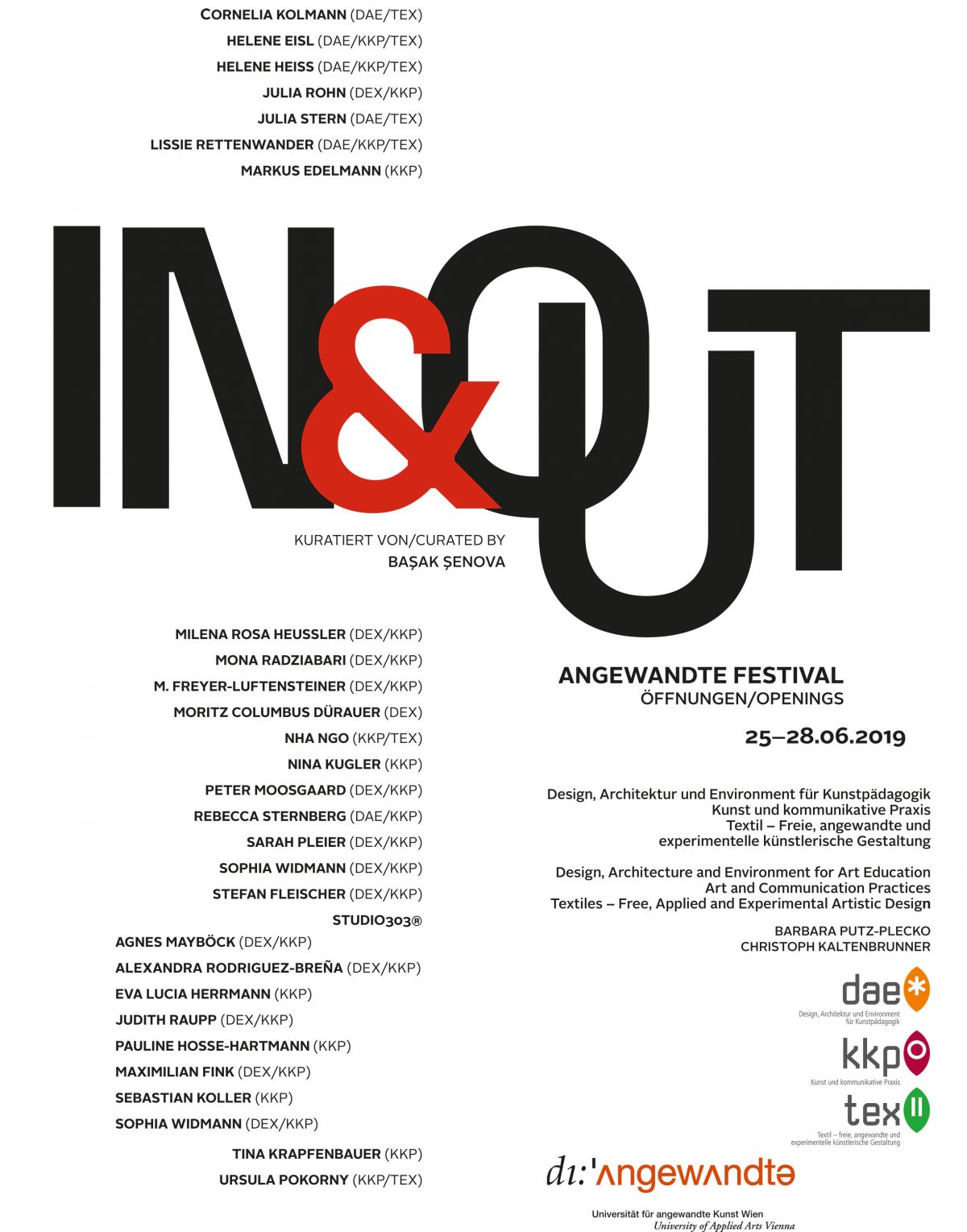 The exhibition In and Out, curated by Basak Senova, is part of the Angewandte Festival 2019 and shows works as well as (lecture) performances and interventions of students from the departments Art and Communication Practices; Design, Architecture and Environment for Art Education; Textiles – Free, Applied and Experimental Artistc Design at the Institute of Art Sciences and Art Education.

suture
noun
1a: … a stitch made with a suture
b: the act or process of sewing with sutures
2a: a uniting of parts
b: the seam or seamlike line along which two things or parts are sewed or united
3a: the line of union in an immovable articulation…also: such an articulation
…
suture
verb
sutured; suturing\ ˈsü-chə-riŋ , ˈsüch-riŋ \
transitive verb
to unite, close, or secure with sutures …(1)

Approaching and gathering artistic research, positions, and methodologies from a perspective that questions and experiments their relationship with the public —through the urgency of social, political and cultural issues— requires a combining and composing element. IN and OUT brings a variety of artistic responses that range from small scale interventions to performance series; from on-going projects to small scale interventions; from lecture performances to site-specific installations; from video screenings to riffs of experimental weaving techniques; from sound works to interactive objects by 20 students and a temporary collective from classes of KKP, DEX, DAE, and TEX. By being spread all over the buildings and the Oskar Kokoschka Square, they are all sutured together through content, form, methodology, and approach-based links that suggest various paths of reception and ways to suture them through IN and OUT’s scenography. In this respect, the curatorial approach of IN and OUT takes into account of “suture” (2) as the combining and composing element for exposing the relations between the works and its spectator according to the presentation modes of the works and their diverse methodologies of producing content. At the same time, this experience of viewing produces another form of content with the presentation of the supplementary material that belongs to their research phase.

When Kaja Silverman elaborated on the notion of “suture” in Hitchcock films, he underlined the relationship between the speaking subject [the art work] and the viewing subject [the public] as mediated by the camera [the exhibition and/or how it is being presented] (3). In this line of thinking, by also taking the notion of “lapses” into consideration, IN and OUT enables similar tidal dialogues and situations between the works and the public; the works and the venues; the exhibition and the festival; and among the works. The exhibition structure constantly sutures and then disconnects the works and their content in the exhibition in and out. Some repetitive design components such as nametags, stickers, and booklets also support the construction of suturing.

IN and OUT has been shaped by internalizing the main reflections of the festival theme as “openings”, yet the exhibition also exposes some crosscutting themes and research strains processed by the participants: Nha NGO (KKP/TEX) and Johanna Folkmann (KKP/TEX) are both working on “memory re-construction” by using different research methods and media; Julia Stern (DAE/TEX) approaches “identity politics” through weaving techniques and cross-cultural exchanges in geo-political context; Markus Edelmann (KKP) questions the role of the artist in our highly politicized world through his performances; in her audio-visual compositions and social interventions; Junia Lahner (KKP) explores the relationships of the materials fur, leather and skin in aesthetic as well as material-oriented respect: to each other, inside space, to the beholder, within their connotations; Nina Kugler‘s (TEX/KKP) video essay of a dialogical intervention at the interface of language, politics and commemorative culture records emotional reactions at Sibirian Gulag sites; Sophia Widmann’s (KKP/DEX) artistic research is based on the experiences on perception; Milena Rosa Heussler (KKP/DEX) focuses on digital technology, cybernetics, social constructs, science fiction and the links in-between by producing a gender sensitive cyber wearable; Tina Krapfenbauer (KKP) works on data visualization; Helene Eisl (KKP/TEX/DAE) is working with a recognition software by questioning the assumptions of its algorithms for value systems; Lissie Rettenwander (KKP, DAE, TEX), who founded the Weltweit Erstes Stimmgabel Ensemble (The World’s First Tuning Fork Ensemble), conducts performances by using different frequencies; Monika Freyer-Luftensteiner (KKP/DEX) underlines the significance of our social coexistence in an increasingly digitized world; Sarah Pleier (DEX/KKP) conducts body-centered research on personal and private spaces; Stefan Fleischer (KKP/DEX) unfolds the processes of artistic research with performative actions; Ursula Pokorny (KKP/TEX) and Helene Heiss (KKP/TEX/DAE) experiment on image production by also speculating on seeing what is being seen; Moritz Columbus Dürauer (DEX) works on a site-specific installation and a series of photography which based on the shifting circumstances and challenges of migration; Rebecca Sternberg (KKP/DAE) contemplates on issues of intimacy in social relationships; Cornelia Kolmann (TEX/DAE) deals with the antagonism of the society and the individual and the space in between this antagonism; Mona Radziabari (KKP/DE) criticizes the overconsumption routine of the art world with exhibitions, activities, and art-fairs; Julia Rohn (KKP) questions the act of purchasing of “ethnographic merchandises” in museums as a continuation of colonialist attitudes; and Peter Moosgaard (KKP/DEX) is probing into “late capitalist ethnography” through his “hyper-real” objects and lecture performances.