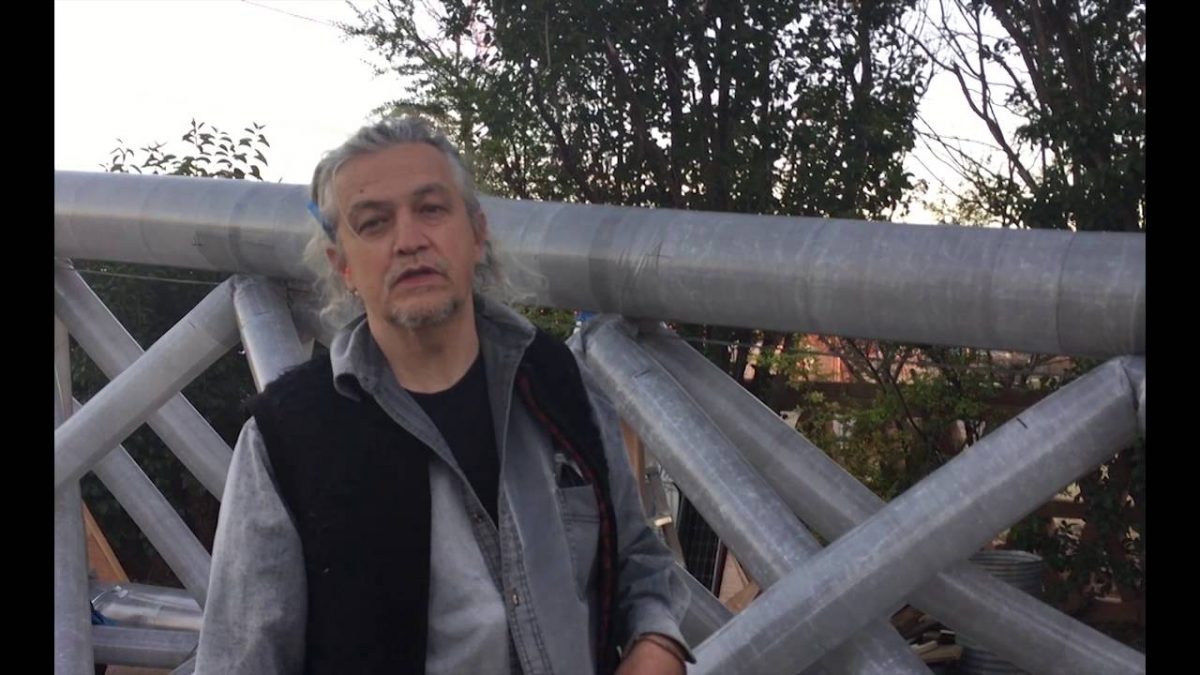 For over a decade, Chico MacMurtrie has been researching and developing methodologies to create lightweight, soft robotic sculptures that can perform in the reflection of disempowering boundaries and physical borders. The genesis of the border-crossing idea intertwines with MacMurtrie’s childhood, growing up in towns along the U.S.-Mexico border. For him, the building process, which opens up conversations between the communities and designates a knowledge sharing activity, is the core of the project that results with a performative gesture of two robots connecting to each other over the fence by absorbing light and the dreams that surrounds them.

In 2018, MacMurtrie was the artist resident at the University of Applied Arts Vienna as well as visiting professor at the department of Art and Communication Practices. This year, he will be giving a presentation of the outcome of the robotics workshop with the students during the Angewandte Festival. Furthermore, on 21st June, he will be launching the Euro Border Crosser at Museum Quartier Wien. It is a timely artistic intervention which seeks constructive and fresh perspectives for facilitating the intersection points of technology, art, and individual political standpoints.

Basak Senova: The notion of temporality is embedded in the performative and choreographed activities of the robots, as well as the fact that these borders are always built up as temporary solutions, but always end up becoming permanent markers of human rights suppression in every sense. Could you expand on this?

Chico MacMurtrie: It’s a temporary gesture to oppose all of this separation of countries and people. I have three pieces of the wall that was put up during the first President Bush’s era. They were really sloppy and temporary and made from all the surplus landing mats from the Vietnam war with the idea of “We have to stop this surge of immigrants!”. The next generation fence was from the Obama era; and although the Obama administration wasn’t really involved these anti-immigration views, they implemented very harsh policies on the border with the immigrants. I think the people living in these communities never expected to have a permanent wall, but it continues to be more permanent and even more intimidating.

The robots in contrast to this harsh metallic world are really getting the ephemeral in and address the temporal. They are in danger crossing that wall because if something happened in the movement, it could shred them.

BS: Yes, the fragile look with the lightweight inflatable material contrasts with the scale and the act of trespassing a border protected by advanced and militarized surveillance technology. In this context, could you talk about the material and the mechanism of the robots?

CM: It is a high tensile fabric originally used for sails on hi-tech boats, hot air balloons, dirigible-flying ships, and high pressure inflatables among other things. It is extremely strong but vulnerable to puncture. When people see the inflatable, often they think it is made of aluminum because of the color and because it becomes so rigid and yet it can absorb light.

It is almost like a magical material because light is drawn to it and it lights up. In the sunset, in the desert when the sun goes down its grey colour literally turns to orange. I use servo controlled pneumatics to control the inflatable tubes, this gives me very precise repeatable movements. I like the way it gives this illusion of not being a machine because its movements are quite organic. When the tubes are fully inflated it has the ability to pivot and move like a mechanism.

BS: With this ability to perform fluidly, they arch into a bridge over the fence. In reference to many architectural and cultural connotations along with the symbolic gesture of illustrating an open gate, I would like to ask you about the “arch” form.

CM: It is a powerful form that has been repeated over and over in my works, such as Inflatable Architectural Growth (2010) or Organic Arches (Time Traveler) (2014). It is a notion of an organic form growing into architecture. It is a fascinating reference, in a sense; it indicates how nature creates this monolith form that have inspired architecture for centuries in different cultures.

BS: Despite the fact that it is an impossible option —and therefore reminds me of many challenges associated with the border— I am captivated with this idea of seeing them as permanent installations.

CM: I have been thinking about freezing them as real structures and doing some experiments at my family ranch in Arizona at the border that I use as my studio. While making them permanent is possible, It will have to be a different era to have them permanently arching over the fence.

BS: Speaking of challenges, how do you plan to install them at the other side? Do you ask permission from the border patrol units for the performances? And how do you envision the project to be realized?

CM: For this specific project and these issues, I am working with Kerry Doyle, the director of the Stanlee and Gerald Rubin Center for the Visual Arts in El Paso. She has extensive experience with immigrant communities and projects on border. My vision was to have three robots in Mexico and three in America and they travel with their teams and cross borders. At the moment, I already have four in progress, so I wish to create two more in Mexico, accordingly I am building a team willing to go to border crossings along the 2000 mile border. The robot and the tools for it are being built with the team in each country and the outcome depends on what kind of material and techniques that the community uses there.

My cousin is a lawyer with an immigrant background, I asked him some questions about the legal issues and technicalities. For instance if the robot is not touching the fence or the ground at the other side, is it still illegal? So, we are introducing an element that is not understood by law. We are sliding into this neutral zone where there is no definition of this action. If nobody physically climbs the fence, then it is not really trespassing. I have been thinking about these issues almost for 10 years now.
I am half Irish and half Mexican and I was born in New Mexico, I have relatives in Mexico and whenever I go there I meet with the group of people and try to figure out the politics and their opinion about it. It is mostly the jurisdiction of the border patrol; the politicians can only introduce their decisions. The border patrol has the sole authority to stop any kind of action. When I was at the San Diego – Tijuana border, I had a conversation with a border patrol agent at and he told me that as soon as it is in the art context, I should be able to get permission.

BS: The entire idea is based on a subtle narration that six robots are connecting over the fence and performing. The process of implementing the work will call out and articulate other narratives hovering around the robots. Could you elaborate on these possible future narrations that would be part of the entire project?

CM: When you are closer to the borders, there are many stories happening at the fence. In the 30s and 40s when my uncles from Mexico came over, there were no fences of that nature; people would go back and forth. When I was a child the fence was just a chain link fence. The Mexican kids could come to the American side to the border schools by passing through a hole for better opportunities and education. Now, because of the border wall the narrative involves technology, as they can’t commutate physically.

BS: What fascinates me about this project are these witty dichotomies that the project processes, such as soft and organic robots poetically resisting the militarized technology, or the act of producing technology bringing the communities together to share knowledge and experiences regarding their current conditions. So, my last question is how do you see the participatory aspect of the project?

CM: I see the technology as a kind of constructive element. It is complex and intriguing. I produce soft machines and it does not make sense in military terms to use a soft machine rather than a hard machine or does it?

I will also conduct workshops for students from both sides and my goal is to empower them by showing how to use technology through art. In Mexico there is this incredible tradition “Día de los Muertos” (the Day of the Dead) where they conceptually bring dead relatives to life to celebrate the day together with them. They build costumes and instruments working up to the event. My workshops would follow the same logic. I am interested in taking the border crossers into the community and involving them in the process to bring power to the action. Using technology is also a way of opening up a conversation with the students and with the community. As a result, it does not only open up this possibility for two communities to communicate, but also it gives them the opportunity to be able to create their own tools and realize their own dreams.